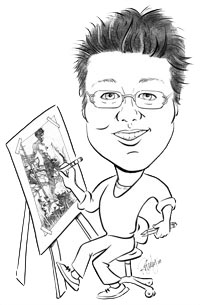 Jae Lee is a Korean-American comic book artist who has worked on such titles as Hellshock, The Inhumans, and The Dark Tower: Gunslinger Born. Jae was born in South Korea in 1972 and immigrated to the United States with his parents in 1977. He got his start at Marvel Comics illustrating a Beast story arc in the Marvel Comics Presents title. Jae's first major project was a 13 issue story arc on Namor, the Sub-Mariner. During a two year period, Jae illustrated small story arcs on Spider-Man and X-Factor.

In 1993, the Image Comics company was formed by several major comic talents that wanted a better deal for characters they create themselves. Jae illustrated the first few issues of two of these series (WildC.A.T.S. Trilogy and Youngblood Strikefile) before trying his hand at creating his own series. In 1994, Hellshock was born. The series was a supernatural tale of a fallen angel, but Jae was not happy with the final product. Three years later, Hellshock was re-launched. This time the series was a psychological mystery rather than a straight-forward supernatural horror. Unfortunately, Jae pulled the plug on the series a year later with only 3 issues produced. The series was finally wrapped-up in 2007 when the final issue was completed and packaged in graphic novel format.

In 1998, Jae returned to Marvel and illustrated the 12-issue Inhumans mini-series. When that series wrapped up, Jae collaborated on a new series for Marvel - The Sentry. The next few years saw him work on Captain America, Hulk & Thing: Hard Knocks, Transformers: G.I. Joe and Fantastic Four 1234.

Beginning in 2007, Lee worked with artist Richard Isanove and writers Robin Furth and Peter David on Marvel Comics' The Dark Tower comic series, based on Stephen King's The Dark Tower novels. Lee illustrated the first three miniseries in that series, The Gunslinger Born, The Long Road Home and Treachery. He returned for the fifth book in the series, Battle of Jericho Hill, and the 2013 one-shot, Sheemie's Tale. He also provided cover and interior illustrations for the Donald M. Grant edition of King's eighth Dark Tower novel, The Wind Through the Keyhole, which was released February 21, 2012.

In 2012-2013, Lee worked on the Before Watchmen project, drawing the mini-series Ozymandias written by Len Wein. He illustrated the second volume of Superman/Batman for DC Comics in 2013-2014 with writer Greg Pak.

Site design © copyright 2008-2021 by Darren Andrews.
All characters and images on this site are © copyright Jae Lee and respective copyright holders.

Disclaimer: This site is not affiliated with or endorsed by Jae Lee
or by any publisher referenced within these pages.